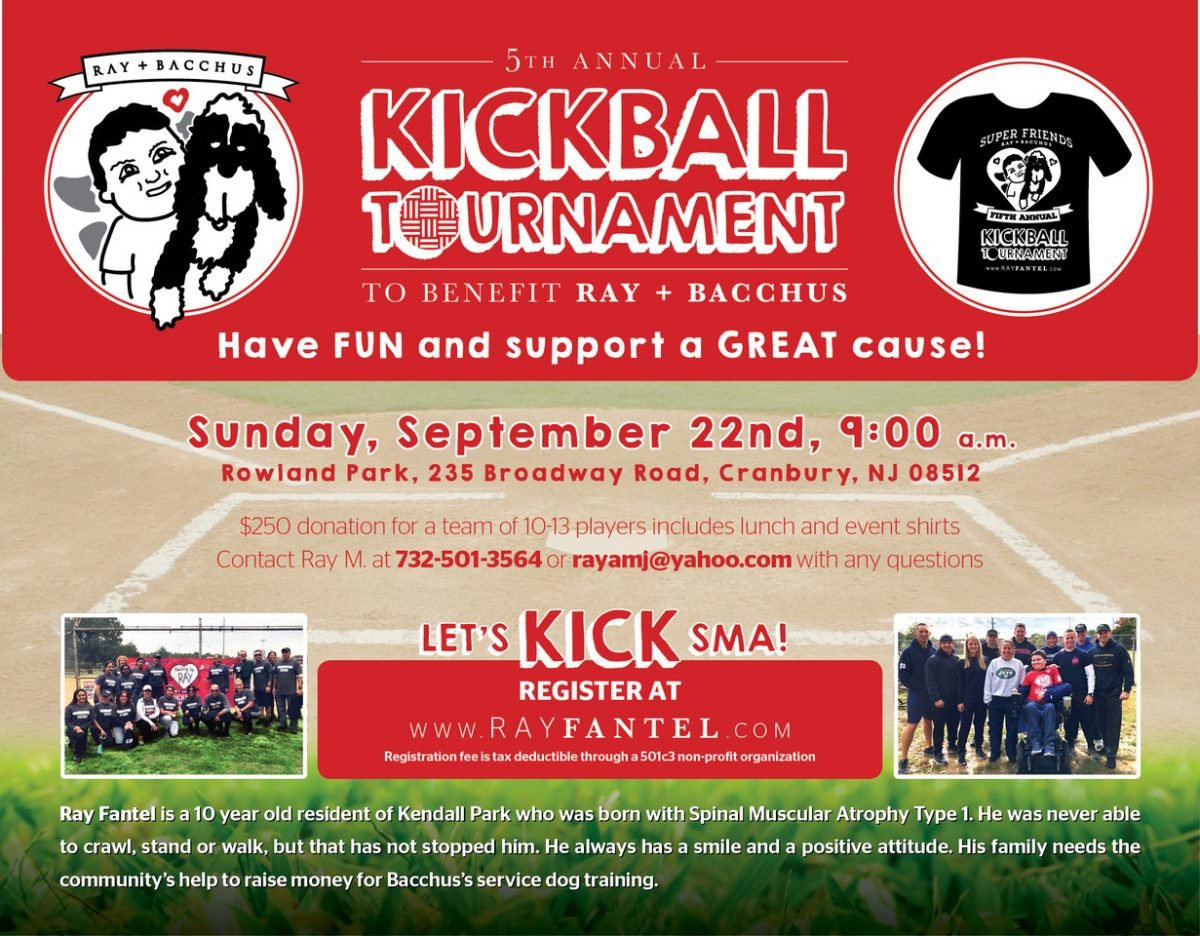 An inspirational 10-year-old boy from Kendall Park living with an incurable and terminal genetic disease will be the beneficiary of a charity kickball tournament from which all proceeds will be donated to the training of his service dog.

Ray Fantel’s new best friend, Bacchus, a black and white Bernese Mountain Dog and Poodle mix, known as a Bernedoodle, was recently gifted to the boy and his family from Highfalutin Furry Babies, a Florida boutique breeder.

The fifth annual kickball tournament to benefit Ray and Bacchus will be held Sept. 22 at Rowland Park in Cranbury at 9 a.m.

A tax-deductible entry fee for each team, which may consist of 10 to 13 players, is $250. For more information or to register, please visit Ray’s website at www.rayfantel.com, email rayamj@yahoo.com or call 732-501-3564. Registration closes Sept. 18.

Money previously raised from the annual kickball tournament, which South Brunswick residents Lynn and Ray Maiorano founded, has helped defray some of Ray’s medical expenses including repairs to his handicap accessible van, an overhead lift system, a wheelchair lift for access to the house and specialized therapies the family’s health insurance provider does not cover.

“It was a success and they offered to hold it annually,” Ray’s mother, Marcy, said of the kickball tournament, at which participants will receive lunch and commemorative T-shirts.

“We are hoping more people will want to be part of this fundraiser and have some fun playing kickball while helping Ray.”

Infants diagnosed with SMA Type I usually have a life expectancy of two years. Ray will celebrate his 11th birthday in October. August is SMA Awareness Month.

Ray has never crawled, walked or stood. He cannot sit without support. Ray speaks softly. He works hard to hold his head up. He requires round-the-clock care from nurses and his family. He receives home instruction, as well as physical, occupational and speech therapies. Medical conditions such as a severe cold, which may appear innocuous to healthy individuals, can leave Ray in intensive care. Ray has endured multiple hospitalizations and surgeries.

“Ray is an amazing young man who doesn’t let SMA get in the way of living life to the fullest,” Marcy Fantel said. “SMA has not affected his spirit nor his happiness. He loves to spend time with family, play with his friends, and play Miracle League baseball. He likes to cook, bake, paint and go on all kinds of trips. We are always amazed at how Ray continues to fight SMA, live with a huge passion for life and touch so many people. He has an amazing attitude, smile and twinkle in his eyes.”

Marcy Fantel said her son, who uses a power drive wheelchair, wants to become more independent, a goal she hoped Ray could strive toward through the administration of SPINRAZA, the only FDA-approved drug available to treat SMA, but one from which Ray has yet to gain substantial strength.

“Therefore,” Marcy said, “we chose to go down another road and found a Bernedoodle breeder in Florida. The breeder, who has a hearing-impaired daughter, graciously donated a puppy, Bacchus, to Ray to be trained as a service dog.”

Alicia Marshall, the Florida breeder, founded Highfalutin Furry Babies at the request of her precocious daughter, Lexie, who is profoundly deaf. At just 8 years old, having witnessed firsthand the struggles families endure to secure a puppy that is health tested and trained to become an assistance dog with lengthy wait lists and astronomical financial stakes, Lexie asked her mother to breed happy, healthy, beautiful puppies and give them to children and families in need. Marshall now donates one puppy from each litter to families such as the Fantels.

“There have been some incredibly amazing families including Ray’s that we donate to throughout the year because of Lexie and her own desire to give back through something she holds so dearly to her heart,” Marshall said. 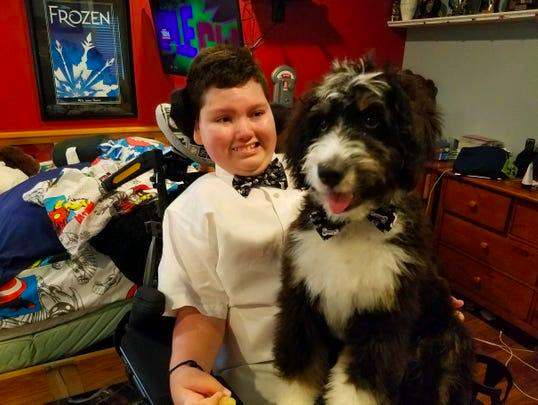 Marshall said she knew Ray needed a Bernedoodle that was going to be big enough but mobile enough to maneuver in a crowd because the dog could not sit in Ray’s lap for an extended time period. She also wanted to ensure the dog’s temperament and health were flawless. Marshall said Bacchus “scored amazing” on his puppy aptitude test.

“It’s been an amazing journey meeting the family and being able to give back to the community in regard to Ray,” Marshall said. “It’s a very big deal to give to somebody who may not have a best friend outside of his own family, and now he does for the longevity of Bacchus’ life. It’s a huge gift. It makes him happy every day because Ray can’t do all the things other kids do. We are really so humbled.”

Highfalutin Furry Babies has donated more than 40 puppies to children with disabilities, injured veterans, 9-11 survivors and many other people who were in need of service or therapy dogs. Interestingly, Marcy Fantel, Marshall and Bacchus share the same birthday.

“Ray faces a lot of challenges, but his attitude is amazing,” Marcy Fantel said. “He goes to a lot of medical appointments and therapies, but he does not complain. Our home is filled with medical equipment, but it does not faze him.”

After birth, Ray received a clean bill of health. However, during a well checkup at the pediatrician five months later, Marcy said Ray seemed “floppy, especially compared to our older son, Ethan (13).

“Everyone assumed he would catch up,” she said. “At that visit, our pediatrician expressed concern with Ray’s low muscle tone and recommended we see a neurologist.”

“We love our boys more than anything,” Marcy said. “As we digested Ray’s diagnosis over the next few months, we vowed to do everything possible for him, to give him the best chance and to make sure he enjoyed life no matter what length of time he has.” 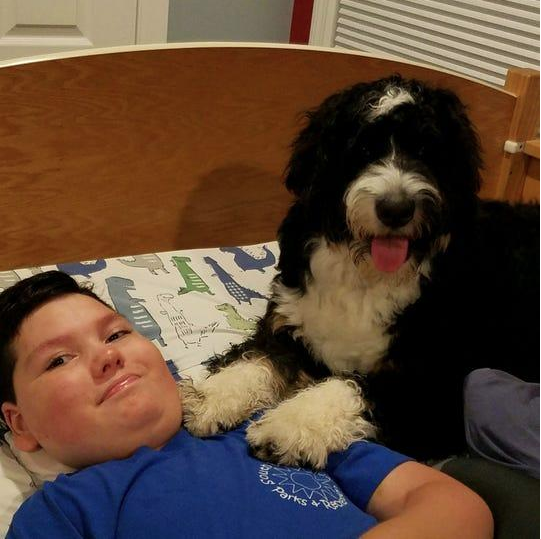 Affecting one in every 6,000 to 10,000 babies worldwide, according to the Cleveland Clinic, SMA causes weakness and wasting in the voluntary muscles. As a result, spinal cord motor neurons begin to shrink and die, preventing a child’s brain from controlling the body’s voluntary muscles, especially those in the arms, legs, head and neck. Consequently, the muscles begin to weaken and waste away, adversely impacting movements such as walking, crawling, swallowing and breathing.

“Ray never says that he cannot stand or walk,” Marcy said. “In fact, he says he will stand and walk someday. We love his attitude and do not tell him he will not be able to walk.

"No one knows what the future holds.”